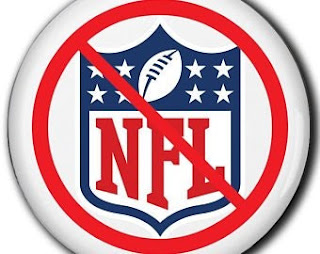 #BreakTheNFL The NFL owners decision to ban African American players from kneeling in protest against incidents of unjustified killing of black citizens by law enforcement during the national anthem is an assault on the dignity and citizenship of all African Americans. it represents a clear calculation by the NFL owners that it is more profitable for them to be enablers of racism than Justice. Their decision should not be permitted to stand unchallenged or unanswered.
A for-profit league whose teams are composed of 70% African American players should not be allowed to profit from the labor of African American citizens they employ while simultaneously enabling the suppression of their dissent against racial Injustice. in a more perfect world, the players union would denounce this action and all players would refuse to take the field until this decision was reversed. I do not believe the Players Union would be willing to take such a stand, although they should. It falls to the African American players, to their fellow African American citizens and to all persons of goodwill who understand essential wrongness and racism of the owner's decision, to give a definitive answer. In taking this decision, the owners intend to compel the silence of black players by holding their livelihoods hostage.
What is good for the goose is good for the gander. The NFL owners should be confronted with the same mutually assured financial destruction of the value of their franchises if they do not rescind this policy. The league is made up of 70% African American players. Every single one of those players should refuse to take the field for a regular season game in the 2018 season until this policy by the owners is rescinded.
Such an action will require the same commitment and courage that Colin Kaepernick has displayed. It will require a willingness to accept the possibility of defeat and take a stand anyway. It will require the same resolve that was displayed during the Montgomery bus boycott, which lasted 381 days. African American players must do what Montgomery protesters did. They must plan this action, prepare for it, announce their intention to do it and if the decision is not rescinded, implement this protest unrelentingly until it is.
The African American players must not be expected to do it alone either. All of black America must stand with them in this fight, because they will be on the front lines, fighting for our dignity as citizens. That means as individuals, we don't watch football, we don't buy merch, and we do everything in our power to cut off any and all direct or indirect financial support of the NFL from our own pockets. In addition, we ask our non white friends and neighbors of goodwill who understand why the NFL cannot be permitted to assault the dignity and citizenship of African Americans and profit from it, to stand with us and to also deny the NFL their financial support. We use crowdfunding mechanisms to raise money to help ensure that the players who expose themselves to potential financial ruin in this fight, can feed their families, obtain health care and survive the hardship that will certainly befall them as the owners employ every tool at their disposal to break their resolve.
Collectively, African American organizations from the NAACP to the Southern Christian Leadership Conference, from the Divine Nine to every type of black professional organization, should collaborate to enable and force multiply the financial impact of a black player walkout.
This is the proper and required response to a multi-billion dollar for-profit entity like the NFL deciding that it is more profitable to enable racism against African American citizens than to support justice for African American citizens. If it is allowed to stand, the message sent to every other powerful for-profit company or group of business people is that its good business to knuckle under to racial bigotry and disregard the dignity and citizenship of African American citizens. It is not in the interest of Black America to permit business models to operate in this fashion with impunity. It must be decisively demonstrated that enablement of racism against African Americans for profit DOES NOT PAY. #BreakTheNFL
#BreakTheNFL
2018-05-25T19:36:00-04:00
Political Season
Comments


Okay, the first trailer for this movie was a mess and did not say Star Trek to me at all. This trailer is much better. It feels like the Trek vibe, some focus on Kirk that makes sense. I think action in these flicks is good, particularly if it has a point, if it's action grounded in a reality that action must be taken. So I actually think this trailer is a serious win, BUT......the trailer and the movie if these things remain, has two fails, one minor but annoying and the other just really problematic as hell to me.

Fail 1 - minor, more annoying than it should be, and that is the villain looks just like G'Kar, the Narn diplomat in the Babylon 5 series. Was instantly my first thought when I saw him. That is a fail and how the character designers miss that the villain looks like a ripoff of that is beyond me. I'm going to spend the whole movie feeling like the Federation is facing off against the Narn. it will be an irritant the whole film, like a fly buzzing around that you can't shoo away.

FAIL 2 - All caps because this is the big one. WHY FOR THE LOVE OF GOD ARE WE GETTING ANOTHER TREK FILM WHERE THE ENTERPRISE IS DESTROYED!!!

The ship is a character in Trek as pivotal and key as Kirk himself. It's like the unnamed member of the team -Kirk, Spock, Bones, Scotty, Uhura, Chekov, Enterprise. And we now have in multiple movies, this key member of the team getting killed off and not only killed off, but getting taken out in ways that give her no opportunity to even demonstrate her mettle, to give as good as she gets and to go down hard, go down fighting and bloody up the other son of a bitch on the way out. They keep killing this character, but they never give her death any meaning!

You sacrifice key characters for impact in a story, but this particular plot device of the Enterprise being destroyed merely to allow the crew to then be forced to operate in other ways is becoming a regular thing. It's treating Enterprise like Lois in BVS, having her get in trouble just so Superman can save her. But Enterprise doesn't even get saved, it just gets wasted to be resurrected for the next film, so she can be beaten to death again.

This is the huge and seemingly repeating fail for me with this Trek and the one before it. You can't keep killing this key member of the team and treating the Enterprise like a throwaway plot gimmick.

These new movies need to figure out some balance between the interplay of the human characters and giving the Enterprise an opportunity to shine in some serious ship to ship combat where everything is on the line. But you just can't keep throwing away the Enterprise every movie. It's not iconic, full on Trek without the goddamned Enterprise!
Star Trek Beyond - Stop Killing the Enterprise!!
2016-05-27T11:12:00-04:00
Political Season
Comments

The legal standard for review of police use of force needs to change. Under current legal standards, police behavior like this and worse is permitted and allowed as lawful. The standard is clearly out of alignment with decency and human rights.

Jazz Shaw over at Hot Air opines about NYT reporting on what looks to be a new round of "fly or do not fly" arguments about the confederate flag getting ginned up in Missippi.

“The South” – at least as defined as a unique, richly flavored heritage in the American melting pot – nearly died at the end of the 19th century. But it hung on in the tenacious way that southerners have always held on. They held on even as they came (as Virgil Cane said) and tore up the tracks again. And as they held on and regrouped through the 20th century, they had a symbol to cling to. It might not have been the best symbol, and others would obviously see it as a sigil of war, but it was the symbol they had. And they hung on to it. It grew to mean something deeper and more profound about the cultural identity of just being from The South when everyone else wanted to pretend that The South had never existed. That’s what it’s all about. And it’s what it’s been about for a very, very long time.

I don't think he explains much about the meaning of the confederate flag at all with the above, but let's set that aside. Here's my personal take on the confederate flag.  I don’t think the confederate flag should be the official flag of any federal, state or local public entity, and I don’t think anybody should want it to, but that’s for the people of those different jurisdictions to decide. I think people should be able to fly it or otherwise display it, because that’s freedom of speech. If their community ostracizes or otherwise responds negatively to them because of it, I say great. If their community thinks it’s fine or actively cheers, I say shame. But that’s America.

A lot of the Hot Air comments have said that people who are not from the south simply don’t get it. That the confederate flag symbolizes something deep and fundamental, a history and heritage encompassing any number of things about the south, its culture, its history and people that are elemental to it’s meaning to southerners. They suggest that racism and slavery, while certainly bound up in the flag’s symbolism, are merely incidental to it’s meaning, rather than core to what it stands for. You can have a lot of fine debate about it, a lot of fascinating historical discussion. I suppose there is something to that argument. Personally, I don’t think race and racism are incidental to the confederate flag’s symbolism, but I’ll accept this view of it at face value as sincerely felt and believed by its proponents.
As a black citizen, as a descendant of people who were enslaved, as a descendant of people who wore the Union uniform (13th US Colored Heavy Artillery) the confederate flag is the symbol of the people, who had they won, would have kept me and mine enslaved to this very day. It’s the symbol of the people who fought and died by the thousands, who were willing to kill thousands of their fellow white citizens, for the right to maintain my family members who came before me as chattel within a routine and organized system of degrading, violent and inhuman slavery so that I could one day be born into it as well. When I look at the flag, what I see are the colors of the people who desired to perpetuate a continuous and barbaric crime against humanity on me and mine and were willing to kill and die for it. Show a swastika to a Jew and you get a visceral reaction that pretty much anybody understands. Show me or any other regular black citizen a confederate flag, pretty much the same thing. It’s the symbol of people who fought a war to preserve their ability to enslave and degrade us. That’s what I see and that’s never gonna change.
Confederate Flag Wavin
2015-11-29T22:08:00-05:00
Political Season
Comments

Every local official associated with cover up should be politically destroyed

Every local public official  that facilitated the delay in releasing the video and covering up the crime should be pilloried .

Laquan McDonald’s Death Is an Outrage. The Charges Against His Killer Are a Political Triumph. http://flip.it/W-p.n

Every local official associated with cover up should be politically destroyed
2015-11-28T09:03:00-05:00
Political Season
Comments

If we're not careful, it could happen

Listen to the spymasters