Open Carry Advocates Fight for the Right to Intimidate You

Lately, there have been a variety of news stories out of Texas about open carry advocates down there traipsing into big box retail chains like Target openly carrying loaded weapons such as shotguns or semi automatic weapons. **Rant beginneth here** 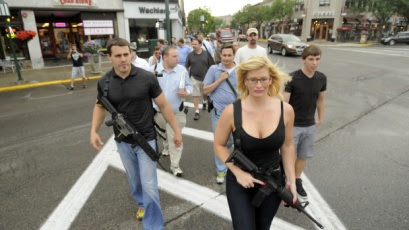 Walking around a suburban Target store with a loaded shotgun or semi automatic weapon for what??!! Because you can? Mass killings aside, there is little justification on personal security grounds for this behavior. All it does is sow fear in the unarmed people around them. Nobody knows if they are crazy or not. You worry about what might happen if you have a funky interaction with one of these people. Carrying around lethal weapons in public is threatening to other people and begets more crazy, because if these people become the norm, I'm going to pack because every damn body else is packing and I feel threatened, NOT because I have some rational personal security fear based on something more than politics driven paranoia.

And while they don't want to admit it, the reality is that people who do this nonsense want other people to be intimidated. You openly pack a weapon so that people can see you are armed with a lethal weapon and they will act accordingly. Nobody openly packs like this simply to make a statement of how much they love the constitution. You pack openly to let everybody who sees you know that you are able and willing to kill anybody that crosses or threatens you. These open carry advocates don't want to cop to that motivation, but it's laughable to claim it's not part of what's going on.  Why else are housewives gonna pack shotguns slung over their backs and slep kids and a stroller into Target to do serious shopping? It's not even a practical thing to do to haul a damn shotgun in and out of every commercial establishment you visit.

Carrying a weapon openly has deterrent value, it's about the only reason to do it. The intent is to intimidate, and the rest of us normal, unarmed people don't know whether you are crazy or not. You walk in doing this unnecessary display, and now some poor slob sales clerk or cashier has to approach you about it? These days, someone walks into a place with a gun visible, there is no good reason to believe they are not about to kill everyone in the joint. This is ridiculous, juvenile behavior from a bunch of adults doing it just because they can and because they enjoy looking intimidating to all the unarmed people around them, whether they admit it or not.

What they don't seem to realize is that their tactics actually hurt their cause and even more importantly, that their cause is not supported by the majority of people.  Most people don't see any reasonable justification for openly carrying loaded guns around in the course of everyday life.  You simply won't get the vast majority of people to agree that it is reasonable to carry loaded weapons to the grocery store, dry cleaners, barbershop, amusement park, family restaurant, beach, school, church, work, average big box store,  city park, etc.   The reason for this is simple to understand.  It's NOT reasonable.  It does nothing but produce fear in the minds of all the unarmed people around them, which is what they intend.

It is completely unreasonable for them to think that unarmed men and women with their kids around them at Target should be comfortable with people they don't know, walking around openly brandishing loaded weapons which could be turned on them or their loved ones at any moment.  If these people carry a concealed weapon in the event they may need it for personal protection, that's totally reasonable, I have no objection.  But the purpose of openly carrying a weapon is to put everyone around them on notice that they are armed and dangerous, yet they somehow expect all the rest of us unarmed people who would be at their mercy to be sanguine about it.   It's a ridiculous expectation on their part and the fact that they are perfectly happy to carry these weapons into public places and make everyday people not just uncomfortable, but fearful, justifiably makes the rest of us wonder if they should be permitted weapons at all.  Their obliviousness to this leaves them completely open to being judged as people who are unreasonable and potentially dangerous, irregardless of whether that's actually true or not.


Guerrilla World Press nails it:  "All of this is allegedly being done to protect our freedoms. But it’s only the “freedom” of the person wearing a firearm that matters. Those parents who want their kids to feel safe in a public park aren’t free to tell a man waving a gun around to leave them alone, are they? Patrons and employees of Starbucks aren’t free to express their opinion of open carry laws when one of these demonstrations are taking place in the store. Those Jack in the Box employees aren’t free to refuse service to armed customers. Sure, they are all theoretically free to do those things. It’s their constitutional right just like it’s the constitutional right of these people to carry a gun. But in the real world, sane people do not confront armed men and women. They don’t argue with them over politics. They certainly do not put their kids in harm’s way in order to make a point. So when it comes right down to it, when you are in the presence of one of these armed citizens, you don’t really have any rights at all."

This is how places like Iraq, Syria and Lybia work.  Armed men in the streets and your rights, safety and dignity as a human being isn't protected by our shared agreement as a society that this is how we live together, but by every bullet you have available to fire from the barrel of a gun.

Exit thought: I promise you that if I marched 10 sketchy looking black or latino brothers into Target stores for a week, legally and openly packing shotguns and semi automatic weapons, Target would cease debating and mulling over the wisdom of allowing weapons to be carried in their stores so fast, we would all develop whiplash from the about face.